Well, we all know where the bar is set for the year.

Yeah, I know...this tweet from Oreo during Sunday night's Superdome blackout isn't, technically speaking, a print ad. But by now, you've seen it, re-tweeted it, blogged it, enough that it's had the same—and probably better—effect. 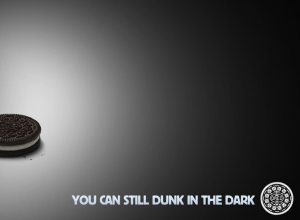 Why's it so good?

I'm going to set aside the remarkable dexterity shown in creating, approving, and getting the thing live, a phenomenal feat in and of itself (though, since I'm being completely honest, I'm not super excited by the prospect of hosting a Super Bowl party at the office next year).

What grabs me is how the messaging ties in so closely with what the brand stands for. At its core, the tweet promises a relevant consumer experience and homes in on what people love about Oreos. No talking animals. No gangsta nursinghomies. No giant CGI budget.

Kudos to Milk's Favorite Cookie. It doesn't get any simpler. Or more effective.