Facebook's latest algorithm change is bringing focus on to brands and companies. The social network is trying to escape from the noisy ad space and news feeds full of click bait and questionnaires, to a more relevant news feed for users. This is very similar to Twitter's platform. Facebook has changed their algorithm to now put more emphasis on trending topics, making relevance important for brands. 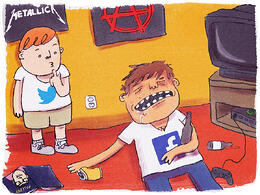 As anybody who manages a brand page on Facebook knows, the company is constantly tweaking its News Feed algorithm, the little robot that decides which posts each users see and which ones are lost forever in the social media ether. It’s what differentiates Facebook most from Twitter’s raw feed, where the mere suggestion of algorithmic tinkering is enough for power users to throw a fit and proclaim that “Twitter is dead.”

One reason people get so up-in-arms about the threat Facebook-style algorithmic filtering poses to Twitter is that on Facebook, no matter who you follow, silly quizzes and lists and other eminently clickable — but often not very substantial — content seems to dominate News Feeds. On Twitter, on the other hand, there’s a more predictable form of chaos. If I follow people who share serious news and analysis, that’s exactly what I’ll see. I summed up this social schism in the post, “If Twitter implements a Facebook-style algorithm, you may not hear about the next Ferguson.”

Now, Facebook’s latest algorithmic shuffle may put it in better competition with Twitter when it comes to breaking news. Starting today, Facebook will place stories related to “Trending Topics” higher in its News Feeds. Facebook also says it will be more aware of highlighting posts about live events, whether it’s a television show a football game or maybe even a breaking news story, while they’re still going on. Furthermore, if a post gets a ton of likes and comments right away before tapering off, Facebook will sense that the update is no longer relevant.

Read more from the source: PandoDaily